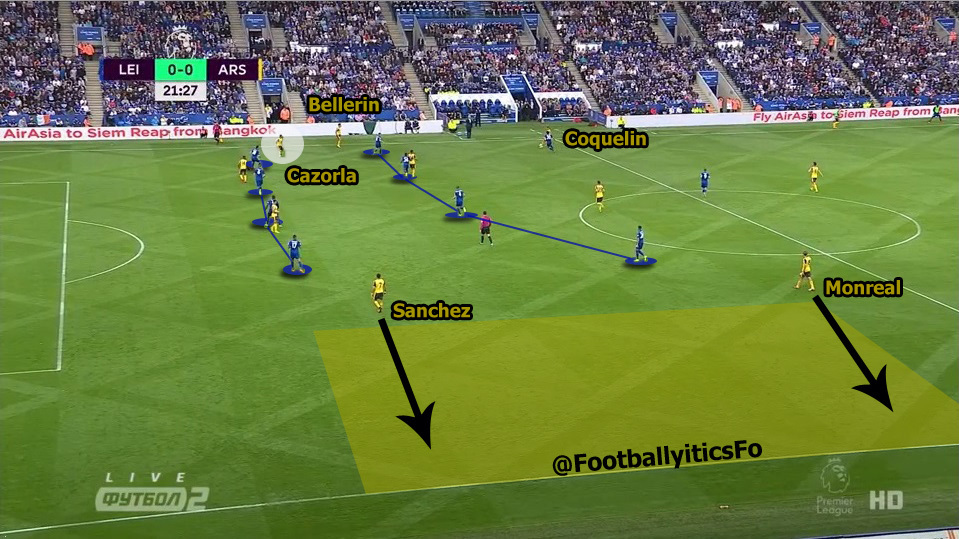 It is never good to lose two in a row and it is especially bad if it happens to be first two games of the season. Arsenal and Leicester were both risking that faith before their clash at King Power stadium in Leicester. Neither of managers wanted that as hit on confidence could be determinant on current campaign in Premiership.
While Claudio Ranieri had his best players all available for the match, Arsene Wenger had to bench Mesut Oezil and Olivier Giroud as they aren’t fully fit after EURO. However, he got Laurent Koscielny back in defence and Granit Xhaka in midfield while Alex Oxlade-Chamberlain took place from Iwobi on right wing and Santiago Cazorla replacing injured Wilshire in attacking midfielder role. In comparison with match against Liverpool last week, Arsenal was stronger in defence and deep midfield position.

Although Kante went to Chelsea, Nampalys Mendy seems a good replacement and Leicester is strong in defence as they have always been. To counter that strong double block of four defenders Wenger occasionally employed Bellerin and Monreal to come inside instead of hugging the line.

Above you can see Monreal drifting inside which left Oxlade-Chamberlain alone on the wing. However, as Cazorla has already left his attacking midfielder slot there are no runners from deep to further disrupt the Leicester’s defensive block. The fact that Coquelin and Xhaka were strictly tasked to cover for counter attacks and not to venture forward didn’t help Arsenal cause. However, we have already established that the goal was not to lose second match in a row so that is understandable.

While Arsenal had the advantage in ball possession in first half it seems their fluid movement of front players didn0t really work against Leicester. At point seemed as Sanchez had free role as he was often drifting into Oxlade Chamberlain’s space while Cazorla also moved laterally. Instead of creating confusion in Leicester defence at times it looked more like disorganized attacking that didn’t really threaten the hosts.

Excellent chart from @11tegen11 provides an insight in Arsenal offensive play and you can clearly see Xhaka was playing sort of deep lying midfielder and a heavy involvement of both full backs. The left side is clearly more active as Oxlade-Chamberlain, Sanchez and Cazorla are often drifting left to overload opposition. However, lack of runners from central area doesn’t destabilize the defence and there is very little to show for all the running.

Above you see Coquelin well closed down but real problem Arsenal has is that they are plying into hands of Leicester despite all the possession they have. Sanchez and Monreal are too narrow helping the defensive line stay compact and close enough to support each other. There is at least 15 yards of space on left flank Monreal and Sanchez should really use to stretch the defensive block and open up gaps for fast players such as Walcott and Oxlade-Chamberlain to run in. Additionally, positioning of Cazorla is completely out of place. Even if Coquelin wasn’t closed down, he would never be able to receive the pass and all he is doing is bringing defenders closer to Bellerin who is already in tight spot.

Second half opens up much differently as Leicester gets their pressing much higher up the pitch and closes down Arsenal really well. Suddenly it is the visitors who can’t get on the ball and Leicester high tempo gets Arsenal in lot of trouble.

You can see above how high pressing by Leicester really worked. Man on the ball doesn’t really have an option but to clear the ball aimlessly. As second half progressed Leicester won lot of balls high up field to launch quick counter attacks. If direct approach for Vardy couldn’t be used the ball frequently went to right side and Mahrez who would then go either one on one or search for a crossing option.

As game was quickly going out of hands for Arsenal, Wenger replaced Cazorla with Oezil while Oxlade-Chamberlain was substituted with Giroud and Coquelin went out to be replaced by Wilshire. This meant Oezil got more central role while Wilshire was more keen to make forward runs compared to Coquelin. While this might have worked in first half with Leicester sitting deeper, it didn’t really work last 15 minutes as hosts were high, closing down well and Arsenal didn’t have fast players as Oxlade-Chamberlain to exploit the space.

To conclude, Arsenal was way too cautious in the first half with two holding midfielders and while they had the ball Leicester was all happy to rely on quick breaks. Second half went all wrong for Wenger as Leicester players were always first on the ball and sprung attack after attack. In the end both temas will be satisfied with a point as that was the idea before the game.

Sometimes you lose a game, because you are unlucky, and sometimes because you are inept. That is the short story of a long hard fought battle Croatia and Portugal played in last 16 match at EURO. Having 17 shots and not a single one on goal, might be unlucky in some cases. It might also mean that one of the sides basically didn’t know what it was doing. Or whatever it was trying, was trying the wrong things. As the stakes are huge in knock out stage both teams came on the pitch determined not to get caught in possession allowing easy chances. They were both disciplined in defence and applied little to no pressure on opposition defence line. Initially, in possession, Croatia was looking for long balls from defensive line to Ivan Perisic who seemed a good target for such approach with his 1,87 m against 15 centimetres lower Southampton right back Cedric.

However, this didn’t work well as Perisic was quickly crowded out by Portugal defence or there were not enough Croatia players to pick up the flick-ons and profit from this mismatch. Combined with these high balls to Perisic, Croatia was using every other possible occasion to channel the play down either wing as you can see in their 1st half offensive zone passing.

However, as they were still quite cautious not to get hit on counter, full backs Srna

and Strinic didn’t go far enough to create overload in wide areas so Portugal dealt with them easily. Below you can see a good example of Portugal defence as the left winger Andre Gomes closes down Srna allowing Raphael to worry only about Brozovic Adrien Silva can position himself to pressure either Brozovic or Modric while Rakitic ‘s run is already under attention of William. Defensive line, in fact whole Portugal, is positioned as in defending schoolbook and they indeed played team defence throughout the game.

Below shot shows huge space in centre midfield as Rakitic pushes forward out of the picture. Space vacated by him isn’t used as both, Modric and Badelj, were firmly anchored on centre line since Croatia is channelling their play through the wings. This way they lose natural 3 on 2 advantage in this area and, as they are too cautious to commit full backs forward, they don’t create any sort of overload in spaces they actually want to attack. Whole Croatia idea of offense was playing into hands of Portugal. Even when they managed to put some crosses in, and they were only eight (two successful), Fernando Santos cleverly replaced agile Ricardo Carvalho with slower but stronger and taller centre back Jose Fonte. Combined with Pepe, those two dealt with everything Croatia could offer in first half.

Portugal was all to happy to defend and was fairly successful doing so. While Croatia had to change something as they had the ball but nowhere near danger zones, Portugal had to wait and react. And indeed Croatia came out of dressing room more eager to do something. For the beginning they started employing much higher pressing. Thing we have seen in the game against Spain that gave them few chances through balls recovered higher up the pitch and that cost them the goal after poorly executed pressing on Spain defensive line.

Additionally, Srna and Strinic pushed forward while Perisic went more central, although still in left wing slot. Despite this more aggressive approach, Croatia still remained true to their long diagonal balls from Corluka or Modric for wingers to get into dangerous position. Not surprisingly, in second half they had the same number of long passes as in the first half when they tried it 26 times. This says that despite more aggressive full backs the main game plan that produced only three low quality shots didn’t really change. You can see below how Croatia is still unwilling to use most dangerous zones of pitch.

What changed was number of crosses that Croatia doubled in the second half. The result was again the same and lot of low quality shots were made resulting with more frustration.

However, really significant change came from Portugal. As Croatia went for more dubious quality pressing, suddenly spaces opened for Portugal. Their passing went more direct, in a way as a result of higher pressing that made for rushed clearances. However, as this pressing often wasn’t executed well, it offered better quick long passes. Noticing this, Fernando Santos made two crucial decisions. He put in 18 year old Renato Sanches and changed his shape from 4-4-2 to 4-3-3 with wide wingers Nani and Qaresma. While Sanches was disrupting Croatian game with his physical presence wide wingers occupied vacated spaces of Croatian full backs that pushed up.

The second half situation is really best illustrated by comparison of Portugal offensive passes during 90 minutes of the game. You can see that in first part of the game Portugal was focused mainly down the flank where Cristiano Ronaldo was dropping deeper. Even those passes that came from right were largely aiming at him. However, the second half debunks the idea of Portugal as only one man team.

If you look at above diagram you will notice two things. Most obvious shift of point of attack to the right. This is due to more attacking play of both Croatian fullbacks, but also as targeting the weakest link in Croatia, Lazio reserve Ivan Strinic. The other important change compared to 1st half is the nature of passes. Suddenly there are a lot more of direct long balls into central and wide areas. This, however is due to Croatia poor pressing and great reaction from Fernando Santos who changes shape and uses whatever Croatia was giving him.

In the end, the goal came after Strinic was caught in possession deep in the Portugal half and again the man of the match, Renato Sanches, pops up to run whole length of field before passing to Nani on the edge of the box.

To conclude, the key to the game was Croatia and it’s stubbornness to (poorly) use the wings abandoning the centre of the pitch despite the obvious talent there. As an effect of this, Portugal coach makes change in shape and uses strong Renato Sanches to disrupt that little movement of ball in the middle that Croatia made. Also, Cristiano Ronaldo finally playing disciplined game for the team. As a last words… No doubt this was adaptive Fernando Santos’ winning over stubborn one dimensional Ante Cacic.