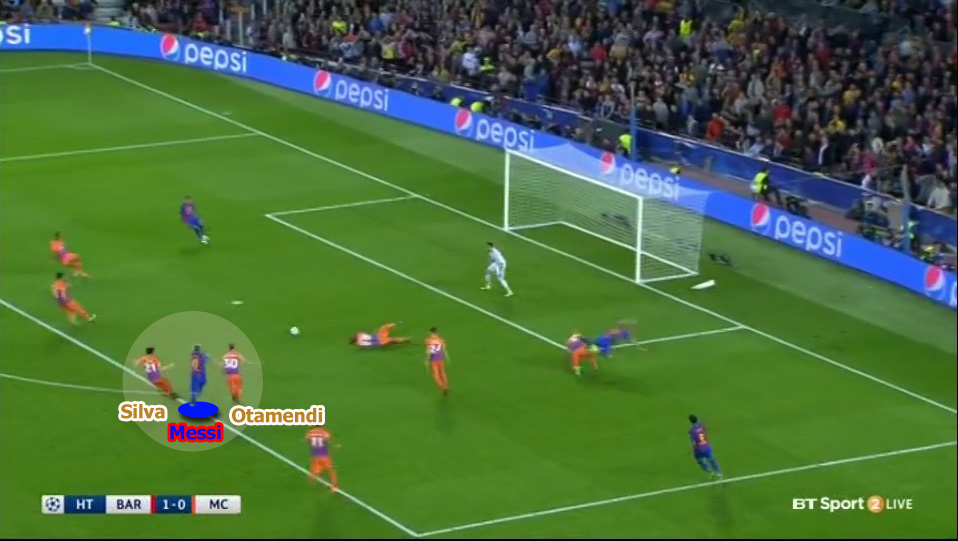 Beefsteak is part of the cow while football is made of mistakes… That’s how Guardiola comforted himself after Barcelona served him with four goals. How many mistakes Guardiola made himself is difficult to judge. However, it is certain he will not abandon his philosophy. Ball playing goalkeeper is fundamental part of how he wants his teams to play and that won’t change. Goalkeeper, however, eventually might.

Barcelona is in trouble in the back line and as game progressed, Pique and Alba both had to be substituted. Despite that, Guardiola kept De Bruyne in nr. 9 spot until 78th minute when he finally introduced Aguero. Too late, however. But decision to have De Bruyne instead of his best striker from the first minute was driven from the way Guardiola wanted to confront Luis Enrique. Aguero was consciously sacrificed as De Bruyne was fundamental part of Pep’s game plan.

While the ball was at the feet of Ter Stegen, City was very high up the pitch. However, they didn’t press. They made sure to keep passing lanes in central areas covered and prevent Busquets, Rakitić or Iniesta to come deep and pick the ball. This forced Barcelona players into predictable passing from goalkeeper to one of the center backs and then to full back. That was the trigger for aggressive closing down.

Above you see the moment Barcelona passes to Mascherano on the right side. Once the ball was near the byline City attacked in packs in the constrained space. De Bruyne was crucial here as he has mentality and physical ability to shift from left to right following fast tempo Barcelona is able to produce in the defensive line. Furthermore, he is able to press intensively and then track back. Characteristics Aguero lacks although he might be better finisher.

How hard it was for Barcelona to cope with this intensity from the attacking line we can read from possession. First quarter of hour teams were split equally on the ball. However, most indicative is that players who spent most time on the ball among hosts were Ter Stegen and Umtiti.

Above you see very good passing diagram from @11tegen11 and how this approach from Man City influenced Barcelona. Busquets, normally one of the most influential players and one who’s job is to connect defence and midfield was almost completely cut off. Their game suffered as well since Iniesta and Rakitić struggled to get on ball. Guardiola’s intent to seal off the midfield was quite a success. Instead of Busquets it was Digne and Mascherano who had to connect the lines and that is in big part thanks to De Bruyne’s mobility and hard work.

Despite solid performance that denied Barcelona the space and time in most dangerous zones, hosts managed to get into the lead after bizarre string of luck and Messi’s composure and determination. First Fernandinho slipped far away from goal and left the ball to Messi and few seconds later already won ball rolled right around penalty mark.

At that moment Messi was still surrounded by Otamendi and Silva, but both of them expected to go on counter as the ball was already won. Less than a second later, Messi was already celebrating his first goal.

From that moment Barcelona takes the initiative for following 15 minutes which was the time City needed to get back into the match. Although there were no significant tactical changes, the visitors upped their game and managed to finish the half creating few promising chances themselves.

When second half kicked off it was expected that City would continue to search for equalizer since Barcelona didn’t do anything significant. However, another bizarre moment came in 51st minute. Any other goalkeeper in any other team would leave defence to deal with lose ball 20 yards from his goal. However, Bravo is brought to be a ball playing goalkeeper so he went to do his job and – failed miserably. Poor pass into the feet of Suarez meant a prompt shot at goal that Bravo attempts to save and rightly gets sending off for hand ball outside the box. At that moment game was practically over.

Despite very ugly result in the end, City did well in terms of stifling Barcelona. While first goal was rather unlucky, red card is direct product of the way Guardiola wants to play and it determined the final result. Most certainly Guardiola will not change his philosophy as ball playing goalkeeper is fundamental to the build up play, but he might try to find another keeper.