Every now and then there is a match of football played somewhere that you should tape only to show it to any doubters of beautiful game. You have teams that are expected to win each time they get on the field and then you have Croatia. They are capable to dominate the game and lose it in last five minutes (Czech Republic, anyone?). Very next match against Spain they go on and field a reserve side and win against the most dominant team of a decade. They don’t only represent the best tradition of erratic Yugoslavian football genius, they surpass it.

Before the kick off it seemed that last round match decided little. Both teams were through, Croatia sided weakened team and Spain was one goal up after only seven minutes. However, by the end of the game the whole outlook of group, and tournament dare I say, changed.

It all began as expected. Croatia without Luka Modric, Mario Mandzukic, Marcelo Brozovic and Domagoj Vida, was unable to cope defensively against robust Spain. High pressing they employed only contributed to disjointed lines and acres of space Spain is so fond of exploiting. 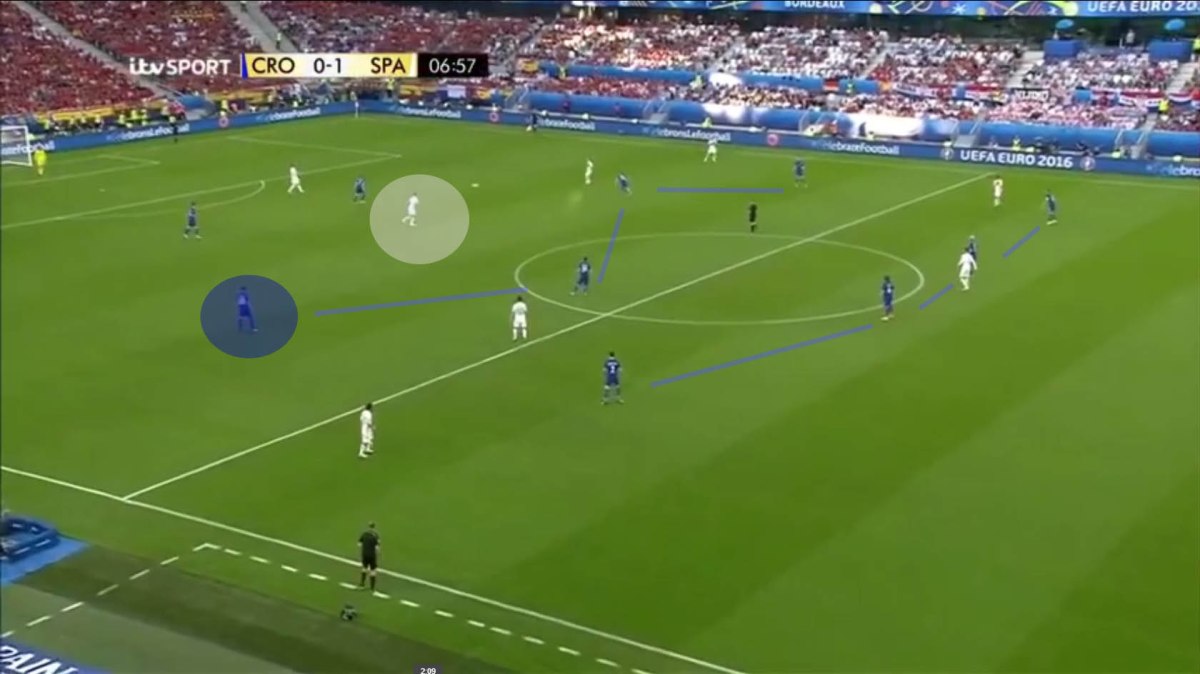 Take a look above you will see several individual tactical errors Croatia made prior to conceding. First, Rakitic is pressing Ramos, and fails. As ball arrives to Iniesta, Rog decides to press again and makes wrong decision as he is late. Now, since Rakitic pressed Ramos, Bousquets remains alone in circle. Now look how wide is Croatia left winger Pjaca and you see the unopposed space Busquets can take the ball to. That is where the goal chance was made possible. Rest is down to what Spain does best – moving into space. It would be much less dangerous if Croatia paid more attention to the most dangerous part of the field – the middle, instead of being occupied with Juanfran who is out of the picture and couldn’t significantly influence the play at that moment.

From then on it seemed like a downhill ride from a Balkan nation as they had a lot of trouble organizing any sound attack. Only Fiorentina’s Milan Badelj was dropping down to connect the defence with midfield and as result Croatia was unable to take the ball in opposition half in any organized manner due to Spain pressing.

Above you can see why Croatia had problems taking the ball out of their own half. Badelj is dropping back but he is marked by Fabregas and Rog (in circle) is completely isolated not helping at all with ball circulation as Spain presses high.

Additionally, It seemed every time Spain got the ball over to Croatia half, they had time and space to turn towards the goal or to shift the ball to one of their free players. In a word, Croatia was unable to cope with frequent changes of positions Spain does and was very prone to through ball. It seemed very easy for them to break the midfield line once they broke through the initial pressing in their own half for whole first period. After all, that is how they scored. 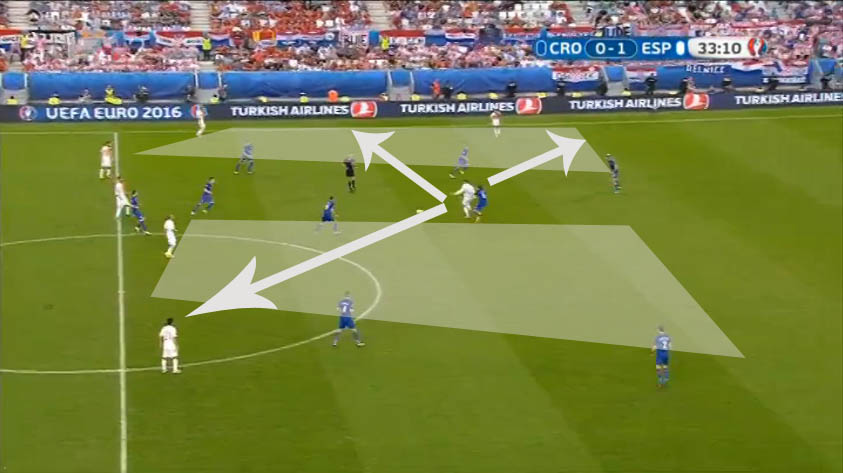 Now take a look at above picture and note where are all Croatia players looking. They are all occupied with Morata who receives the ball and all nine players are looking at him. Not only they aren’t paying attention to other players, they aren’t paying attention where they stand. Srna, right back, has left Nolito alone. Pjaca, the right winger, has left Alaba alone and whole right flank is exposed while potentialy Iniesta and Busquets can get to back pass.

Result of this chaotic defending is that Spain was able to connect quite a few balls from centre field to wings that were dispatched back to centre. Nolito failed to convert one of those chances only a minute after they scored but they had plenty of occasions to push through whatever ball they liked.

Above you see typical situation where David Silva receives the ball, has time to turn and pick the best option. Morata fails to control and only minute later they get punished for this as Croatia scores.

Now, while Croatia was quite poor on defence at the time, that was a result of high pressing of Rakitic and Kalinic who weren’t followed well by midfield four as seen when Spain scored. However, it is precisely this high pressing that gave Croatia most of their chances. They could have equalized as once Ramos was caught in possession and the other time De Gea’s poor touch led to a great chip from Rakitic which ended on the bar.

Finally, Rog swept one deflected ball unopposed, passed it to Ivan Perisic who managed to send in a great cross from left which Kalinic was able to convert. Apart from robbed balls and occasional deep cross from Srna, Croatia posed little threat to Spain and they were fairly confident they could score more. However, things changed a lot in the second half.

Whatever was said in Croatia dressing room worked wonders. First thing noted was Rog who started dropping deeper to help Milan Badelj getting the ball into final third. Then Perisic was finally transferred back to his preferred left flank and most importantly, the biggest weakness, the defensive shape, improved a lot.

After the half time marking from Croatia became much stricter and they weren’t dragged out of position as it was the case in first half of the game.

Croatia is set up much deeper as Rakitic and Kalinic press only when they really have the chance to get to ball or force opposition to clear it aimlessly. Spain is still able to get the the ball forward but they are limited to rushed long shots or crosses that don’t connect. To be fair they manage to pull one good chance as David Silva breaks on the right and sends low cross for Morata who misses the goal.

Del Bosque recognizes Croatia is more compact in defence and sends in strong and tall Aduriz to profit from crosses, however, it doesn’t work. As the game progresses Croatia builds confidence and the real changer was penalty that Monaco goalkeeper saves. From then on Spain is more and more frustrated and in the end Croatia gets the winner as Inter winger Ivan Perisic quickly breaks down the right and scores on near post to grab the Man of the Match award.

Few things made the game, apart the goals of course. Once Croatia got level, they got the opportunity to stay deeper waiting for a break and that change in half time really brought them the chance to win as time went on and Spain became frustrated. Changes Del Bosque made weren’t enough to break Croatia in second half and psychological aspect of the game which might have been just the decisive factor.

It all started well for Spain and according to expectations. They had the game where they wanted and due a wobbly Croatia defending, they had to believe it was only the time they score second time. However, Croatia managed to level and a bit of doubt went in. Maybe not at the moment, but certainly after the half time as Croatia started to play more disciplined game. Breaking point came as they were unable to convert the gifted penalty and were essentially unable to threaten the opposition goal as they are used.

On the other hand, Croatia had a lot to prove, they had luck and overconfident Spain on their side as well. The result however proves Spain isn’t invincible under right circumstances and pushes Croatia into the line of favourites for the tournament. After all, they managed to win even if they played without the best player Luka Modric and half a dozen other first team players.